top of page
This site was designed with the
.com
website builder. Create your website today.Start Now

Hi everyone! Sorry I haven't posted for ages! I have been so busy getting ready for GCSE's in just over a months time. Last summer I transitioned into 29ers. This was a huge step for me as a 29er is much bigger, faster and much more physically demanding than the Optimist. I did my first event up in Pwllheli straight after the Optimist Europeans there. This was the National Championships and shortly followed by the Worlds (both of which were in Pwllheli). These were two great events and I learnt loads from them. I sailed with Katie Dabson for the Nationals and Ben Batten for the worlds. These are two fantastic sailors which I learnt loads from over those two weeks.

Next was the ISAF qualifiers at Hayling Island Sailing Club. This was a venue which I was quite familiar with, having sailed there a lot in Oppies. Except, there was one slight difference- we were out in the bay instead of being in the harbour. I sailed with Emma Loveridge (Ladies world champion 2015 with Mimi El-Khazindar) for this event. Overall, we finished 2nd and only 2 points off 1st which meant that we just missed out on the ISAF's girls place (top girl and boy boat go to the ISAF's) in Malaysia. However we were the ISAF reserve boat which we were really happy with as it was only my third ever event in 29ers!

Currently, I am sailing with Orla Mitchell who is 16 and just about to turn 17. I started sailing with Orla in late October, after having sailed with Emma for the ISAF qualifiers. Over the winter, we have worked hard in training and have done some Grand Prix's swell as the Winter Championships. Our last Grand prix was in Marconi (on the East Coast). Here we came 4th overall and 2nd girls, just missing by half a point on top girls and 3rd place overall.

Last week, we competed at the RYA Youth Nationals. This was a fantastic event at which I saw many past Oppies friends and met loads of new people from all different classes. This event is key for us as the RYA select who goes to the Eurosafs in all the different classes. The top 2 boys and girls boats (mainly) are selected to go. This year they are in Austria. Over the week, we relaxed and had so much fun. We had a complete mix of conditions throughout the week which were all so much fun! On the final day, on the first race, a media boat asked us to sail to get some footage of us (the top 3 girls and boys boats in every class were filmed). So we sailed upwind for them. As soon as we looked back towards the committee boat after having sailed upwind for them, the 5 minutes flag was flying. Unfortunately, we didn't make it back in time to the line and got UFD (over the one inside the 1 minute) which meant that our 6th place in that race didn't count which was a little annoying. We were a bit disheartened by that, not realising at all that we came 2nd girls overall! We had no idea! So, we qualified for the GBR Eurosafs team and will out in Austria in August!

We're so excited and can't wait. First I have to get my GCSE's out of the way and Orla has her AS's to do. Then we have the whole summer to sail! Looking forward to it. So pleased with our Youths result and will try to keep you updated. 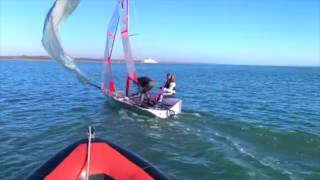 No tags yet.
bottom of page